When I was a young 20-something, without a responsibility in the world, I was doing corporate giving for my company. From the result of a giving campaign, the winning division got to chose a charity to donate to, and they chose the Arizona Humane Society. I contacted the organization and asked if we could have a tour before the check presentation. My colleagues and I arrived to the Arizona Human Society and got to visit the kennels to see the dogs available for adoption. As I admired the dogs, I stopped at one cage and saw a ball of fur staring up at me (well you couldn’t actually see the dog’s eyes because he was in such need of a grooming). I stopped and said hello. He so calmly put his paw up to the cage as if to say hello back, and to introduce himself to my world. I fell in love. We went into the back to make kongs filled with treats for a dog of choice. It wasn’t even a question who I would chose. I walked up to the kennel, but he was gone! Oh no, I thought. He’s been adopted! But luckily, he was just going potty. Right then and there I knew this little guy was my dog. 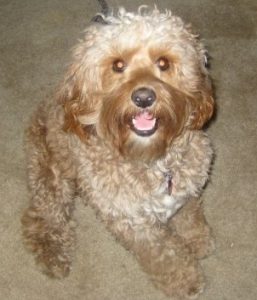 The night I adopted Harley, they had just neutered him. So here I am, a 20-something without a responsibility in the world, now responsible for another life and a “post-surgery” one at that. I remember that drive home from the South Mountain location like it was yesterday. I stared at this teddy bear dog and thought, oh man what did I just do? Ok Harley, I said. It’s just you and me. Let’s do this.
True to Harley’s nature, he refused to wear a cone and the one thing they told me was to NOT let him lick his wounds. How on earth would I do that if he wouldn’t wear the cone? I decided to get creative. I grabbed a pair of my smallest shorts, my smallest tank top and I put it on Harley. The sight was just comical. If Instagram was a thing in 2008, the photo would have been trending. But, as silly as it looked, it worked! From that point in, it was Harley and me. The slightly immature and silly team just learning how to navigate the world one adventure at a time. 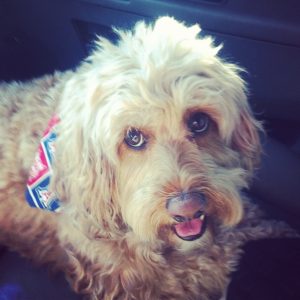 For the first few years, Harley was my solo go-to side kick. I mean it. We did everything together. I loved hiking, so Harley joined me. Together we would peak Camelback Mountain (the Echo Canyon side). Harley was an inspiration and as hikers saw him climb (looking a lot like Benji himself), and they would say that if this little 22 pound cockapoo could do it, so could they. I trained for the PF Changs Half Marathon with my trainer (Harley of course!) running by my side. Together we would increase our distance each day. Harley never got tired. I, on the other hand, did!
Harley was a very silly dog. If I didn’t know better, I’d say he was part human. The poodle in him was too smart for his own good, and the cocker spaniel was just as silly. Put together, it made a dog with the BEST personality who definitely kept me on my toes.

Throughout the first few years, Harley and I went on long road trips, we went on a lot of walks, visits to the dog park and so much more. He had a bionic stomach, and loved food more than anything, so he would give me a heart attack every time he got into food he shouldn’t. One time I caught him open up see’s candy wrappers and ONLY take the candy.
One day, I met a great guy and I decided it was time to introduce him to Harley. The minute they met it was like they were long lost best pals and from that moment on, I knew this guy was a keeper. Harley got an instant Doodle Dad in Scott and together the three of us started to have SO much fun together. From tagging along on road trips to Sedona and Tucson, to nightly walks and sneaking him treats while we watched tv, Harley, Scott and me were the perfect set of three. One day, Scott asked me if I’d like to go on a road trip to Sedona and insisted that Harley come. To my surprise, he proposed to me on that trip, and said that he couldn’t imagine such a big moment without Harley there to be a part of it. I couldn’t agree more.

From single-hood to marriage, Harley was there and then the time came for the move into our new home and the arrival of a new friend for Harley. We never questioned if Harley would be good we kids. We knew he would love them, and he did. From the minute Madeline was born, Harley took on the very important self-created role of Doggie bodyguard and best friend. He watched Madeline grow and was always by her side from coos and crawls, to waddles and walks. Then one Christmas morning, another new friend decided to join their friendship and the two friends added Abigail to their crew. Just like with Madeline, Harley watched Abigail grow each day and played with her every step along the way. 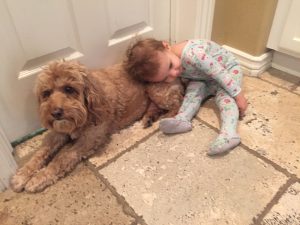 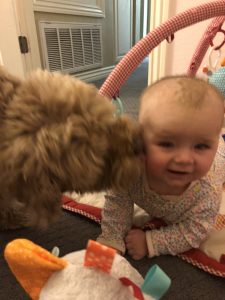 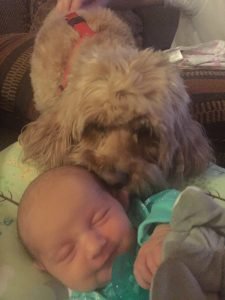 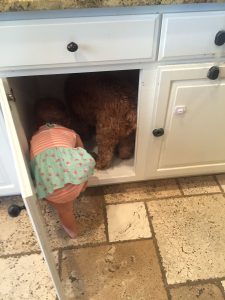 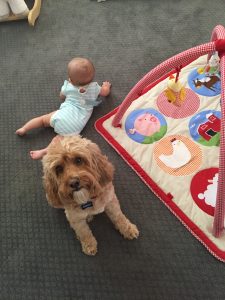 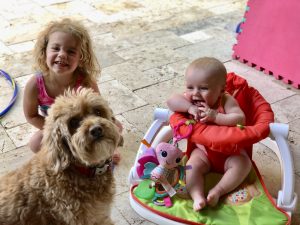 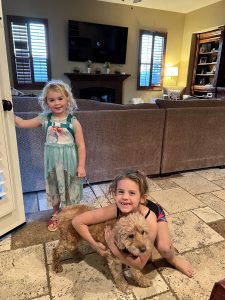 Even as an old dog, Harley was always a puppy at heart and people would be shocked to hear his age. That was Harley. Every morning was Christmas to Harley. He would wake up and sprint down the hallway, down the stairs, panting in excitement to start the day. He would gobble his food before you even put it down, and spend the rest of the day begging for or stealing more. Harley had a FOND obsession with McDonald’s Chicken Nuggets and was well known for stealing them off the table. His paws were human-like and it’s still a mystery how he was able to so delicately get the food off the table without destroying the table itself. He kept our days filled with smiles and fun, and kept the child locks on our cabinets well past the age we needed them for the kids.

With Harley’s enchanting personality, it inspired me to write a children’s book to encourage imagination and fun. Tales from Harley: Licorice Lane was a whimsical fictional story that I wrote as I imagined what Harley would do with his days if we could hear his imagination at work. This book has been such a beautiful blessing to my family. I’ve gotten the chance to be the mystery reader at both of the girls’ schools and they proudly give the book to their friends.

Harley played a huge role in helping me to become the wife and Mother I am today. Harley was caring, kind, loyal, silly, energetic, very hungry and just the best friend.
Harley’s health started to fail him in the last few months. This week, Harley spent his days going on car rides to his favorite McDonalds, painting with his two best pals, listening to music, watching movies and even having playroom sleepovers. But this morning, after one of those special sleepovers in the playroom, surrounded by his two little pals, Harley took his last breath and naturally went to sleep to go to doggie heaven. His last night was such a joyful evening, but his little body was too sick to continue any longer. We are so heartbroken to lose such a special member of our world.
Harley lived such a full life and although it was long (15 years), it doesn’t make it any easier to say goodbye. Rest In Peace Harley doodle do and may you join the other dogs who have been called up to heaven. If you have a dog in your life, show him some extra love today, and give him an extra treat in honor of Harley. Thank you to the Arizona Humane Society for bringing such a wonderful friend into our lives.